TPUUF is now providing HYBRID services with both in-person and virtual access to our services.  All attending in-person services must be fully vaccinated.

We look forward to seeing everyone back in our Sanctuary. 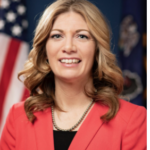 To celebrate Women’s History Month, we are so proud to have Sen. Muth speak to our congregation about the advances women have made throughout history, as well as the work that still needs to be done to close the gender equality gap.  Never backing down from a tough fight, Sen. Muth has stood up to misogyny in Harrisburg, and we look forward to hearing what her experience has been over the past three years and what we can do to advance the rights of women throughout the Commonwealth.

Senator Katie Muth has been a champion for women through her work in the State Senate, and has gained national attention for her tenacity and persistence, despite working in one of the most divisive state legislatures in the country.  In 2018, when Sen. Muth first ran for office, Pennsylvania ranked 49th for women representation in the state legislature.  Since then, Sen. Muth has been joined in Harrisburg by many women elected to both the State House and State Senate from southeastern Pennsylvania.